CricViz analyst Kieran Parmley casts his eye over the top four teams in IPL 2022, and what has made them tick.

As IPL 2022 reaches its climax, four teams have broken away from the pack in the search for a playoff berth. The two ‘expansion’ sides, Gujarat Titans and Lucknow Super Giants lead the charge for the top two spots, and a place in the Qualifier. Alongside them are Rajasthan Royals and Royal Challengers Bangalore, and while both are still under slight pressure according to CricViz projections, both still have their destiny in their own hands, and a slim chance to challenge for a top two spot. 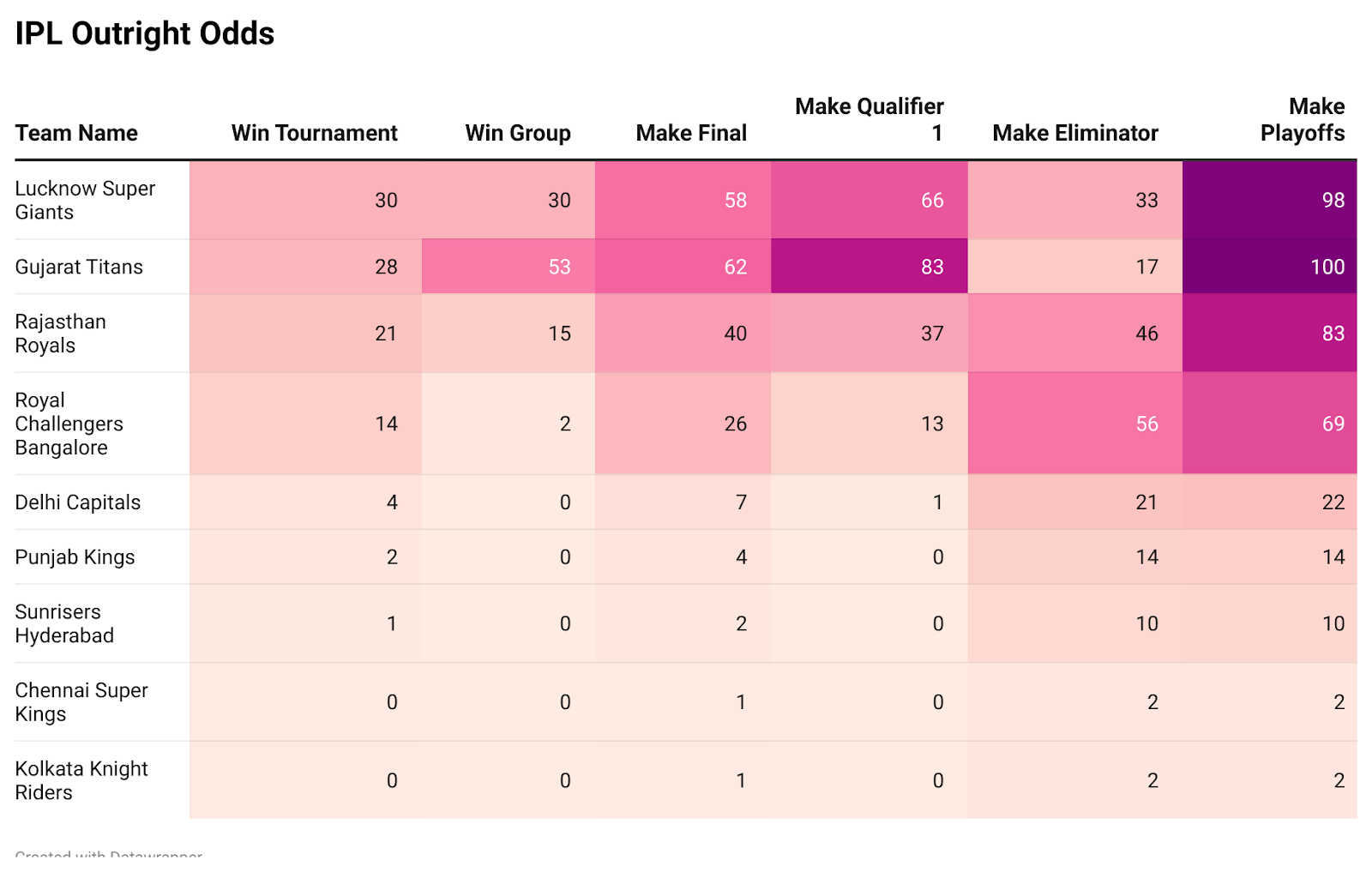 This is an adaptation of our WinViz models, where we take the probability of each team winning each game and simulate the season 10k times. These probabilities then represent the results of this simulation. In each simulated game we also simulate a margin of victory so NRR implications are considered.

So what have the ‘big four’ sides done differently compared to others, and how have they put their own stamp on their playing styles?

The graphic above shows the total cost of a team’s starting XI in terms of crore rupees: green is more expensive, red is cheaper. The chart throws up plenty of green for those in the top four, and even more so when looking at recent starting XIs with the top four sides possessing the four most expensive starting XIs during Round 11’s fixtures.

While injuries and early international absentees have brought down the average cost of Lucknow Super Giants’ starting XI, the remaining top four candidates have averaged more than 72 crore invested in their XI – that’s over 80% of their total auction purse translated into the starting XI and the remaining 20% being left for bench options.

Compare that to Sunrisers Hyderabad, a side with more depth and a more spread investment strategy in the auction, averaging 64.70 crore per starting XI, particularly after dropping Romario Shepherd (7.75 crore) very early on in the season.

The grid also shows the point in the season in which sides have shifted away from the players they invested heavily in during the auction in search of alternatives – Punjab Kings dropping Shahrukh Khan and Odean Smith and Kolkata Knight Riders removing Venkatesh Iyer, Varun Chakravarthy and Pat Cummins are perhaps the two most notable shifts in starting XI costs.

Mumbai Indians however have gone the other way – their two most expensive XIs have come late in the season and both were during their only two victories this campaign, perhaps a sign they should’ve trusted their auction recruitment more initially at the start of the season.

It should be noted that team performance is not a direct result of investment in the starting XI – Kolkata Knight Riders have the joint most expensive XI played this season at 80.85 crore and Punjab Kings started the season with a relatively expensive side, their drop in starting XI cost and perhaps lack of trust in those they invested in during the auction perhaps suggests problems with their auction recruitment in the first place. 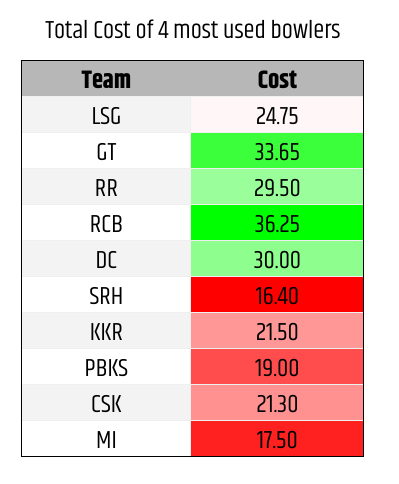 One of the areas the ‘big four’ have invested heavily in during the mega auction is their bowling attacks, particularly the four frontline bowlers. Bowling strength is perhaps even more of a key indicator for performance this year considering the batting heavy conditions we’ve seen on show during the season in Mumbai and Pune. Only Delhi Capitals have a higher investment in their four most commonly used bowlers than any of the top four sides.

Royal Challengers Bangalore in particular have invested heavily in their bowling attack – their main quartet of Josh Hazlewood, Harshal Patel, Mohammed Siraj and Wanindu Hasaranga cost them a combined 36.25 crore at the auction and via retention and have returned the third lowest economy rate and second lowest bowling average in the IPL. Not only have they invested well in their main four bowlers, giving them 16 overs of quality in every game but they’ve also combined them with complimentary all-round finger spinners Glenn Maxwell and Shahbaz Ahmed, meaning RCB have almost all bases covered to handle opposing batting units as opposed to using second-rate options.

Rajasthan Royals have a somewhat similar approach to RCB albeit with slightly lower value options and a lack of fifth bowling quality but they’ve still used their bowling assets to good effect this season, especially when overcoming their lack of toss luck – defending totals in six of the nine games in which they’ve batted first. Gujarat Titans have two high value individuals in Rashid Khan(15 crore) and Lockie Ferguson(10 crore) taking up a bulk of their spend on bowling, complimented by Mohammad Shami and other good value assets.

Lucknow Super Giants are perhaps the most surprising team on this table however a lack of investment in their front four bowlers doesn’t suggest a lack of quality in their case. Instead they’ve got value options leading their attack – Dushmanta Chameera at 2 crore and Ravi Bishnoi at 4 crore are two pickups at the auction and retention phase that were heavily undervalued. Such value allowed them to pickup the likes of Avesh Khan, Jason Holder and Krunal Pandya, all of whom came at perhaps slightly inflated prices considering the market dynamics. Even if they don’t represent considerable value on the face of it, Avesh is one of the best local pace bowlers and both Holder and Krunal provide significant balance – a good example of a side using market inefficiency in one area to ‘cover’ for another.

This is a factor that doesn’t apply to Rajasthan Royals, who are doing it their own way without the need for batting or bowling depth, but the remaining three playoff hunting teams all possess multiple dual skills players in their starting XIs and while a ‘true’ all-rounder is hard to come by in modern T20 cricket, a combination of multiple players and multiple skillsets can instead replicate the balance that a traditional star all-rounder would bring.

In the case of Gujarat Titans their star retentions formed the base of their balance, leaving them without the need to chase balance at the mega auction. Hardik Pandya’s bowling adds value when he’s fit, he even used himself as a frontline option early on in the season to allow the side to play an extra batter. Rashid Khan’s batting also provides much needed depth alongside emerging ‘finisher’ Rahul Tewatia – Rashid Khan’s match winning 31 not out from just 11 balls against Sunrisers Hyderabad is enough evidence to ensure the game is never over for Gujarat Titans with the bat.

Lucknow Super Giants have recruited one of the most well-rounded sides in the competition under the guidance of Gautam Gambhir and Andy Flower, with a considerable number of bowling options inside the top six as well as quality batting among the lower middle order. What’s more impressive about LSG’s bowling depth is the variety of options they have with three different types of spin in the XI alongside pace bowlers to cover all areas of the innings, giving them options to attack opposing batting units at will. The only problem that they’ve had is the lack of left-handed batters in their lineup which has caused issues with both matchup and lopsided boundary dimensions this tournament – Krunal Pandya has been deployed up the order albeit with limited success, this could cost them in the playoffs and will no doubt be an area they attack at the auction next season.

As mentioned previously Royal Challengers Bangalore have recruited a very complimentary bowling unit but they’ve also done similarly well with the batting depth they’ve accrued with Wanindu Hasaranga, a middle order batter for Sri Lanka at international level, batting down at No.9. This depth of course keeps them in the game with quality down the order but it also gives them flexibility in extending the batting lineup and using batters in their ideal roles, particularly Dinesh Karthik, who more often than not has his ideal entry point at the death, this applies to both Gujarat Titans with Rahul Tewatia and Marcus Stoinis at Lucknow Supergiants to some extent too with their sides able to maximise their strengths thanks to their batting depth.

Games between the top four sides during the playoffs could see some of the more interesting tactical battles in IPL 2022 considering their similar strengths and team philosophies – heavy starting XI investment, strong bowling attacks, depth with bat and ball and flexibility but regardless of who wins this year’s competition, there’s still plenty for the rest of the league to learn from the playoff sides ahead of next season, particularly when it comes to retentions and rebuilding at the next auction.