Dropped after the failures in the first two matches, Tim David has taken the second half of the IPL 2022, grabbed it by the scruff of its neck, put up performances that will make the Mumbai Indians management rue their decision to drop him in the first place.

The burly, powerful Singaporean ended his season in a spectacular fashion: his 34 off just 11 balls blistering display of power-hitting helped MI close out their disappointing season on a happy note as they defeated the Delhi Capitals by 5 wickets, completing the chase of 160 with 5 balls to spare.

David entered the chase in a straightforward situation – with MI requiring 65 runs from the last 33 balls – on a no-so-straightforward pitch that had balls gripping a little and moving a bit.

A bit moved one ball from Shardul Thakur, David first, catching a faint outside edge off his bat. However, even though Thakur and Pant went up for the appeal, with the wicket-keeper even suggesting he heard something, the DC skipper, surprisingly, didn’t take the review.

Oh, it came back to bite him harshly as Tim David bludgeoned the DC bowlers for 4 sixes and 2 fours in his 11-ball stay, catapulting the Capitals out of the playoff race. 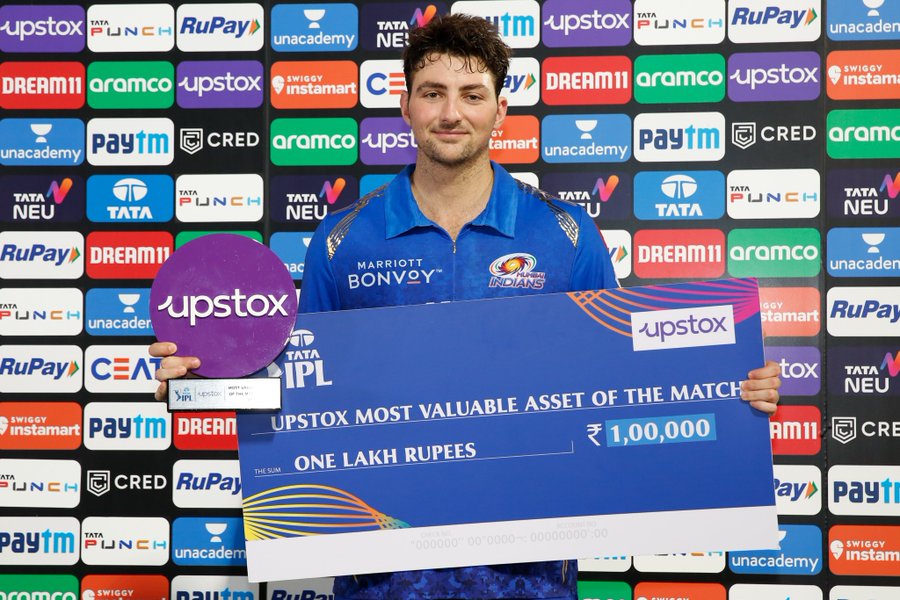 Just a ball after being given a reprieve, David smacked Thakur for a gigantic 97-metre hit over deep mid-wicket off a poor full toss. A boundary off Anrich Nortje was followed by a boundary and a maximum to Khaleel Ahmed, with David showcasing his brute power by fetching a delivery outside off and depositing over long-off!

Thakur came back to take some more from David who happily rocketed a couple of more biggies – one even from a miscued shot – down the ground. Thakur would, though, have his revenge as David top-edged a low full-toss to cover. However, by then he had put MI firmly in the hold of the game.

David ended his season smashing 186 runs at a strike rate of 216 – for any batsman with over 100 runs this season, David has the highest strike rate.

Here are some of the best reactions to Tim David’s fiery knock:

They don’t call @CoachHesson El Professor simply, look at the foresight … released Tim David before the big auctions, let MI have him, and boom Tim does it for RCB. Genius 🤩

Last year in Qualifier Rishabh gave Tom Curran the final over instead of Rabada and that cost DC dearly. And tonight he didn’t review Tim David’s caught behind. Two decisions he will regret dearly. DC fans must be wondering what could have been.. #MIvDC #IPL2022

Tim David to replace Pollard as CSK’s dad for the next decade according to Johns https://t.co/6CHnjA7DVf

Thakur gets Brevis 37 from 33 balls, is it time for Tim David. The battle will be between David vs Nortje.

Tim David is brutal. Should have taken that review atleast for the sake of it.

Tim David is a aix-hitting sensation. Surprised he was benched for so many games by MI this season. Even more surprised Pant didn’t take a chance with DRS in the last over. He would have got David and possibly the match

wouldn’t it have been smarter to retain or buy back Tim David then @DanishSait https://t.co/djIWf1kpgT

Tim David is not playing today so I think Dewald Brevis will be back. pic.twitter.com/3eeIj9r4UP

Apart from Tilak Varma and Dewald Brevis, the biggest positive for Mumbai Indians is TIM DAVID!