5 Interesting Facts About Sanju Samson`s Wife Charulatha: Rajasthan Royals captain Sanju Samson has led the franchise spectacularly in the IPL 2022, taking them to only their second IPL final – after the first one in 2008, when RR won the inaugural title under Shane Warner – and has also been a significant contributor with the bat scoring 444 runs at a strike rate of 147.

However, Samson, who played for India in the Sri Lanka series before the IPL, has been dropped for the upcoming home T20I series vs South Africa. Many feel that his incapability of converting his starts into a big score has cost him a place in the national side.

Speaking of his personal life, Samson, the 27-year-old wicket-keeper batsman from Kerala, is married to his college girlfriend Charulatha.

Here are 5 interesting facts you may not know about Sanju Samson’s wife, Charulatha:

1. Charulatha belongs to Thiruvananthapuram (or Trivandrum), the capital of Kerala. She completed her schooling over there and holds a Bachelor of Science degree in Chemistry from Mar Ivanios College, from where Sanju also did his BA.

2. Charulatha then completed her Masters in Human Resources and, according to tozeenews.india.com, is an entrepreneur by profession.

3. Sanju and Charulatha studied together at Mar Ivanios College in Thiruvananthapuram. Sanju had sent a friendship request to Charulatha over Facebook which she gleefully accepted. From thereon, began the love story of two lovebirds.

4. The pair finally tied the knot on December 22, 2018, after being in a relationship for about five years. It was a low-key ceremony in Kovalam,  a small coastal town in Kerala, attended only by close family and friends. 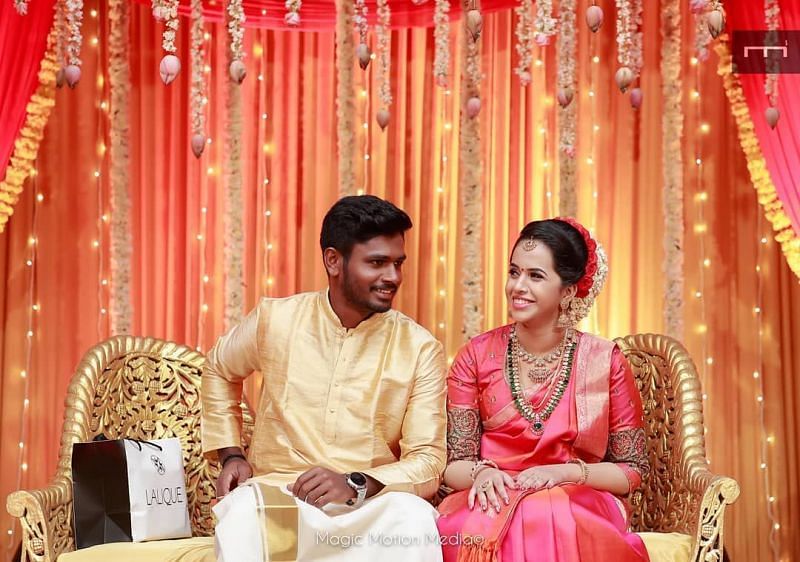 5. What also many people do not know is that the couple belongs to different religions: Sanju is a Christian while Charulath is a Hindu Nair and hence their marriage has been solemnised under the Special Marriage Act.