It has to be noted that England pacer Stuart Broad, who is hailed as one of the most successful fast bowlers in the longest format of the game, was on a streak against sensational Australian cricketer David Warner during 2019 edition of the high-profile Ashes Test series. Broad had dismissed Warner seven times in between 104 balls. Overall, Warner has been dismissed by the England pacer 14 times in Test cricket.

On Thursday, Broad breathed fire as he got better of David Conway on Day 1 of the ongoing Test match at Lord’s in a similar fashion. Seems like the dismissal reminded David Warner of his disastrous run against Stuart Broad and therefore the Australian opener was quick to sympathize with Devon. Warner took to his social media during the ongoing game and shared a cheeky post about Conway’s dismissal at the hands of Broad. Sharing a post from the social media handle of the Barmy Army, Warner wrote:

“Conway, I feel your pain,” 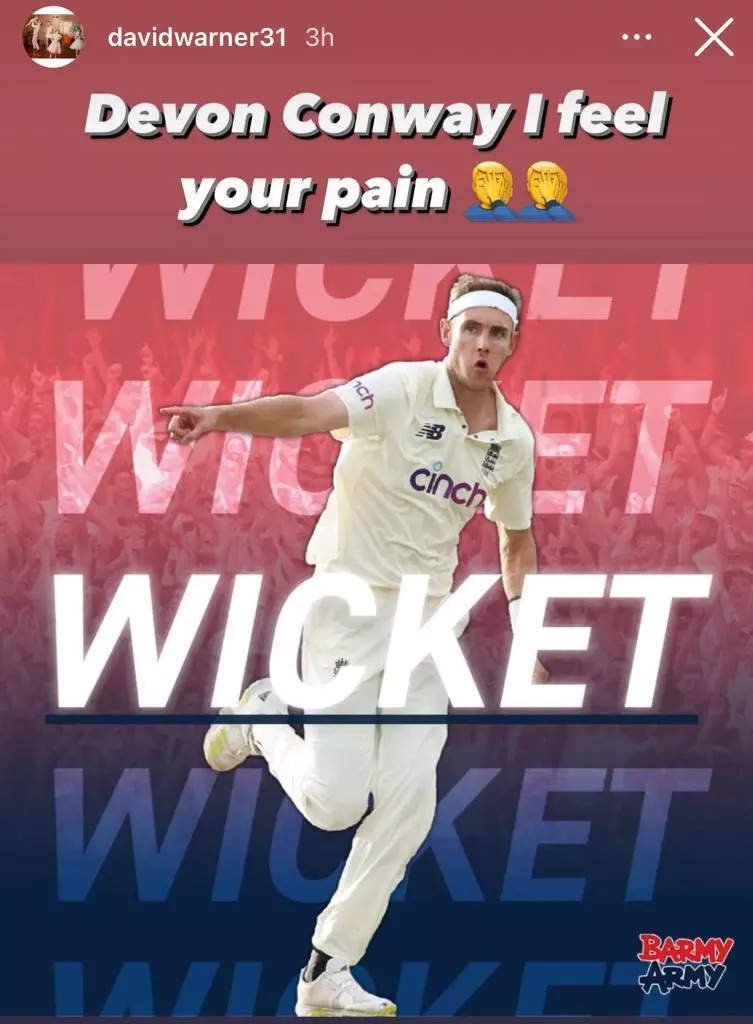 Talking about David Conway’s dismissal, he came to the crease when the visitor had lost both the openers at a score of only 2. Conway opened his account on his fourth ball, however, delivery on a length and outside off, at 84 mph by Broad ended his stay at the crease. Conway got on the front foot to defend but he ended up pushing inside the line with firm hands. The ball flew towards Jonny Bairstow, who snapped a lovely low catch, inches above the ground to put New Zealand in big trouble.

Talking about David Warner, he had an impressive season with his new franchise Delhi Capitals in the recently concluded 2022 edition of the Indian Premier League. Warner was earlier released by SunRisers Hyderabad ahead of the IPL 2022 mega-auctions and was later on roped in by Delhi Capitals at the mega-auctions. In the just-concluded season, he emerged as the top scorer for DC. In IPL 2022, Warner amassed 432 runs off 12 games.