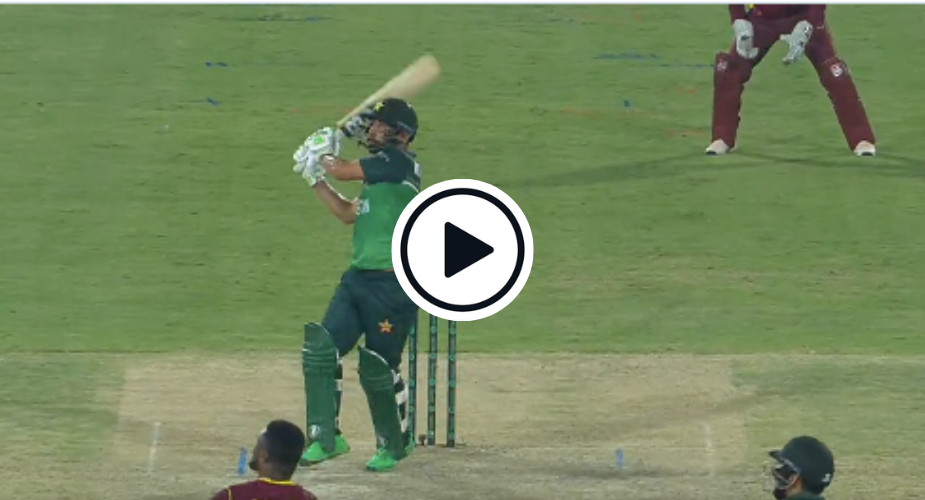 Watch: Khushdil Shah, playing just his fifth ODI, smashed a quickfire 41 not out to steer Pakistan to a win in the first one-dayer against West Indies at Multan, hitting three consecutive sixes in the process.

Batting at five, Khushdil came in after Babar Azam’s exit in the 42nd over, with the Pakistan captain having given his side a solid platform by hitting his 17th ODI century. But Pakistan still required 48 from their last five overs, after Mohammad Rizwan had been dismissed in the 45th over.

After surviving a close run-out chance in the 46th over, and with the equation down to 44 required off four overs, Khushdil decided to take matters into his own hands. Off the third ball of the 47th over, Khushdil hit a Romario Shepherd slower ball for a big six over deep midwicket, kickstarting a cameo that took Pakistan over the line.

He thumped the next ball – a full-toss – over the bowler’s head and into the sightscreen to make it two sixes off two balls, bringing the equation down to 30 off 20 balls. He converted it into a hat-trick of sixes, clanking a half-volley over the extra cover fence to steal the momentum back in Pakistan’s favour.

Shadab Khan’s dismissal in the following over was only a slight dent, as Khushdil hit another six and four off Shepherd in the 49th over to bring Pakistan to the finishing line. Mohammad Nawaz then wrapped up the chase with a six in the last over, with Khushdil finishing unbeaten  on a 23-ball 41, his highest ODI score so far.

Babar’s 103 earned him the Player of the Match award, but the captain passed on the award to Khushdil instead, capping off a dream day for the 27-year-old.