Ben Jones looks at how Jack Leach has struggled in Nottingham this Test, and how his game has changed since debuting four years ago.

England are often accused of giving too much priority to Ashes series, of diminishing the standing of other contests by using them as “preparation” for the Real Event. It was exactly those words which former coach Chris Silverwood used to describe the series against New Zealand last year, before his side were swiftly dispatched by the visiting Kiwis, and India shortly after.

Well this year, as England watched the runs pile up on a flat one, with medium pacers toiling away and physically imposing batters hammering pull shot after pull shot to the ropes, things couldn’t have felt more like an Ashes winter. Finally, England treating the Kiwis with the respect they deserve.

Another key component of English woes in those Ashes contests is a broad, nationwide disdain for visiting spinners, swatted aside by batters trusting in their technique and the lack of demons in the surface. Jack Leach may be on home soil rather than under the Australian sun, but the contest between himself and Daryl Mitchell, as well as plenty other New Zealand batters, brought the same dynamic to mind. 2-140 was the latest of Leach’s struggles in the first innings of Tests, fighting to either hold up an end or bother the set batter, fighting to remain relevant before the footmarks come to the fore. He was not successful.

Leach’s preparation for this Test match was as suboptimal as Matt Parkinson’s at Lord’s. Judged to be concussed and unable to play seven days ago, Leach made a miraculous recovery to be able to play this week, but was unable to train normally in the intervening period. The fact England named their starting XI before Kane Williamson was ruled out meant that their slow left-armer was locked in against a side now boasting four left-handers in their top seven, against whom the Somerset man is notoriously poor. Add to that since the start of 2016, spin averages 140 on Day 1 at Trent Bridge, the highest for any Ground-Bowler-Day aggregate, and you’ve got a cocktail of negatives setting Leach up to fail. These last two days were not the time to make final conclusions about Leach. But it was a time to reaffirm long-standing concerns with his game.

And when we say longstanding concerns, we mean issues which have developed and intensified over a number of years now. Leach is a very different bowler now, compared to the one who debuted back in 2018. He’s had health problems and injuries which have constantly impacted his ability to get a run in the side, and no doubt to develop his game. There have been obstacles, and they have blocked his progress. In truth, they have forced him backwards.

Leach bowls shorter now than when he first came through. On arrival into Test cricket, Leach pushed the ball very full, bothering the 4.1m mark constantly; now, he’s half a metre shorter. Inherently, this is more defensive and makes many traditional finger spin weapons redundant, most obviously the ability to attack the outside edge. In 2018, roughly one Leach delivery per over was played off the back foot, but this year that’s up to two per over. Right now, batters can milk him. 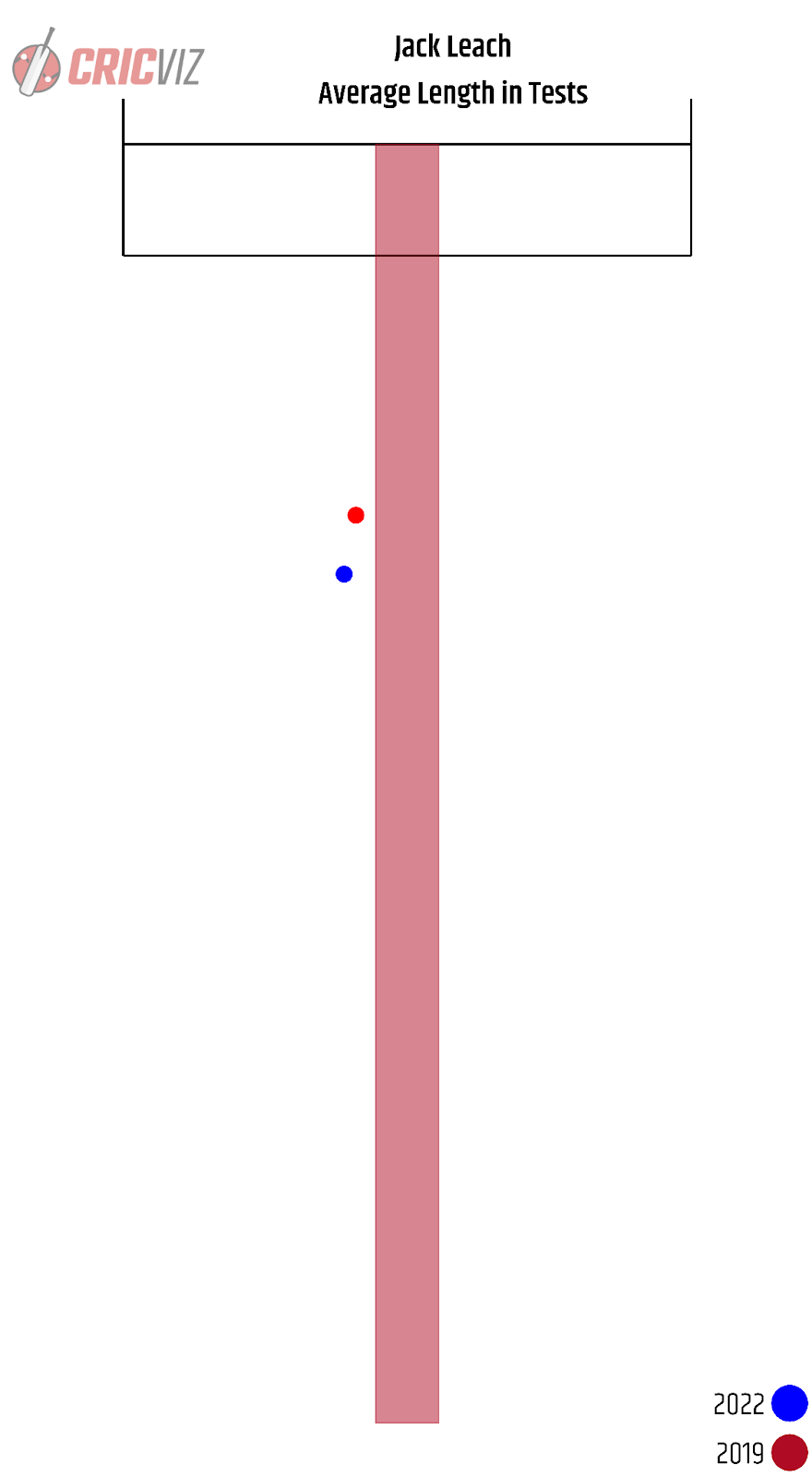 Similarly, his pace has changed fundamentally. When he played in Sri Lanka, Leach was operating at around 81kph, flighting the ball and finding appreciable turn, albeit on helpful surfaces. In England the following summer, he bowled at that same pace. But as his career has progressed, the challenges tougher and the conditions more varied, Leach’s speed has increased. A lot.

Quicker, shorter, more defensive, less effective. Leach’s issues in the first innings appear to have got into his head, leaning into the role of being a “holding bowler” after being told so constantly that he is no attacking threat early on in a five day game. One of the reasons why Parkinson has been kept away from Test cricket, and part of the reason why English cricket struggles to understand leg spin, is the perception that they are uniquely vulnerable to being hit out of the attack. “Sure, they’ll get a few whacked back over their head, but they’ll get wickets along the way”, is always the tone, and it’s a tone rarely struck when talking about more orthodox spinners. Leach, as a finger spinner who doesn’t turn the ball the other way, as a man whose primary weapon is his accuracy, is about as far from a wrist spinner as anyone, and he’s suffered this fate more than once – this Test the latest incarnation. Chennai, Brisbane, and now Nottingham, have all seen Leach targeted by opposition batters – some world class, some not – having been identified as comfortably the weakest threat on show. Daryl Mitchell is a batter who enhances his reputation every time he walks to the crease, and one with a strong record against spin, but he has none of the natural ability to destroy conventional slow bowling boasted by David Warner or Rishabh Pant. Nevertheless, he took apart England’s “containing” option, allowing the rate to rattle along from those early stages.

There were moments in this innings where Leach found his feet. He was unlucky to not remove Tom Blundell early on, after beating the advancing Kiwi through the air and striking him on the pad, with a review narrowly failing to overturn the original not out decision. There were other moments of poor fortune, as Matthew Potts dropped Mitchell at long on this early this morning. But these moments generally came when his speed dropped and his length went fuller. The eventual wicket ball to Blundell was the second slowest he’d bowled all Test, and the lesson is plain to see.

The difference between Leach’s record in the first innings of Tests and the second innings is larger than almost anyone in the history of the game. The difference between his average against right and left handers is similarly historic. We all know that there are plenty of moments within Tests where Leach is fundamentally up against it. But in those moments, Leach is still going to have to bowl, and unless he can simply approve across the board, then he’s left with two choices: attack, or defend. We know far too well that Leach struggles with the latter, so let’s stick with the former. Slow it down. Bowl fuller. Attack.

At Lord’s last week, the ever-present criticism of Parkinson was that he bowled too slowly. To an extent that is justified – he does bowl very, very slowly, and if anyone in the world is going to be too slow, then Parkinson will be that man – but to an extent it was a classically English response to unorthodoxy. We will comb through even the most unorthodox player’s technique for a glimmer of technical correctness, and amplify its influence beyond recognition. Yet ultimately, it’s deviating from those well-trodden paths which give certain players a certain edge, and elevate them from the crowd.

Leach’s battle with Parkinson is an obvious one, but he would do well to learn from his rival rather than focus solely on competition. Embracing his inner leg spinner would do Leach the world of good. Slower, more revolutions, fuller and more aggressive – that’s the direction Leach needs to head in. England are willing to back him, and support him through these periods of poor form, as well as the stages of the game where he’s ill-suited. Using that support to be an aggressive option, to prize wickets rather than economy, might be a better route for Leach right now. It’s the message that Brendon McCullum and Ben Stokes are shouting from the rooftops – there may be nobody who needs to be empowered to attack more than their spinner.