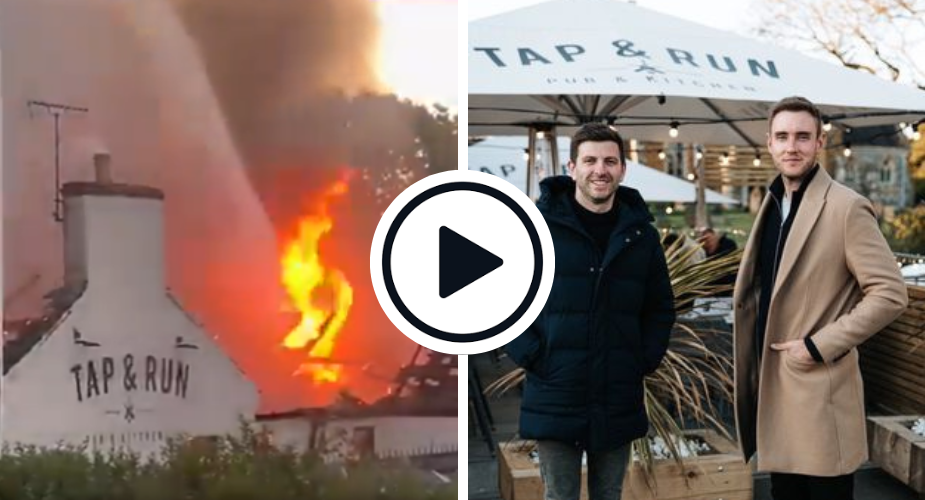 A pub in Nottingham, co-owned by England quick Stuart Broad along with Harry Gurney, was severely damaged when a fire broke out at around 3am local time on Saturday morning.

The first floor and the roof of the pub Tap and Run, winner of the Pub of the Year 2021 in Leicestershire, located in Upper Broughton were engulfed in blazes in the wee hours on Saturday. Eight fire crews rushed to the spot and eventually doused the fire, where no one was injured.

Video of the Tap & Run pub fire at Upper Broughton, part owned by Notts & England cricketer Stuart Broad. @nottsfire says it is still fighting a fire in the roof. pic.twitter.com/k2MvOSzgwt

However, the building was “quite badly damaged”, according to Jonathan Wilson, the station manager at Nottinghamshire Fire and Rescue. “Swift action by the crews has contained the fire to the building but the building is quite badly damaged. We are working to dampen it down and will probably be here doing that for the next couple of hours at least”, he told The Telegraph.

“There was not believed to be anybody inside the building and the fire was contained to the building itself. Crews from Nottinghamshire and Leicestershire together have been working to deal with it.”

…and sorry for any distress the fire has caused the villagers. Thank you to the fire service who have been brilliant and thank you for everyone’s kind messages of support, we really appreciate it. We will keep everyone updated in the coming days and weeks.

James Anderson, talking to Test Match Special, revealed that teammate Broad, who is currently playing the second Test against New Zealand, was devastated after hearing the news. “He’s obviously devastated but he’s here and will be out there. He’s just happy that no one’s hurt. It’s obviously gutting because it’s such a huge part of his and Harry’s lives.”

Gurney told Nottinghamshire Live, “We are obviously devastated but relieved that there was no loss of life. We are so sorry that we will be unable to honour any bookings for the foreseeable future and sorry for any distress that the fire has caused to villagers. We will keep everyone updated on social media in the coming days and weeks.”

The pub has cancelled all tradings for the foreseeable future.

The pub is a part of The Cat & Wickets Pub Company, which is owned by Broad and Gurney. The Tap and Run pub, which opened in 2018, is located on the border of Nottinghamshire and Leicestershire. The pub was formerly known as The Golden Fleece, which had been closed for two years, after which Broad and Gurney took it on and reopened it under another name.