Typically, the joy of a great Test innings is that it’s like reading a novel. The experience of watching it unfold over hours, often days, its greatness slowly revealing itself over time, in line with the dominance of their side, occasionally in contrast to it. As a viewer, you constantly reposition yourself around the innings, examining it from all angles, getting a better picture of its nature, quality, style.

Not today. Today, as England stormed to a series-clinching victory in Nottingham, chasing down 299 in a remarkable 50 overs, greatness revealed itself in an instant. Jonny Bairstow, with 136 (92), took control of an entire Test, a week of our lives, and his entire career, in a matter of moments.

For a while, Day 5 at Trent Bridge progressed in a relatively predictable manner. New Zealand’s tail hung around, adding Useful Run after Useful Run, Trent Boult in particular growing the lead at an alarming pace from an English fan’s perspective. There were shades of the way England bowled to India’s tail last summer, a focus on bouncers and intimidation tactics which distracted from the lead, and the matter and hand.

England’s reply was bright, spearheaded by Alex Lees as others fell by the wayside. When Bairstow came to the crease at 56-3, the required rate was still hovering above 4rpo and those capable of matching that rate were rapidly falling away. As Lees departed, taking England to 93-4, the home side required something rather special to claim the win.

For a while, fluency evaded Bairstow. Before the tea interval he was going along at around 5rpo and playing attractive strokes, but with plenty of risk, almost 20% false shots a healthy check against the growing optimism in the youthful Trent Bridge crowd. Bairstow always unfurls a drive, a pull, or a cut which gets the people going and inspires hope, but for that time up to the break, New Zealand had him.

Everything that New Zealand threw at Bairstow, he went after. Short balls were hooked for six to the short boundary. Full balls were drilled for four through cover point. Every question New Zealand asked, Bairstow had an answer. It was unabashed, brutal aggression. Across the course of the evening session Bairstow scored 93 runs, and attacked 77% of the deliveries bowled to him – since CricViz started collecting data in 2006, nobody has scored as many runs in a single session of Test cricket while maintaining that level of aggression. What’s more, he did it without really making a mistake, a false shot percentage of 16% barely above the average for Test cricket globally. He was driving a bus at 100mph, but making all the stops. 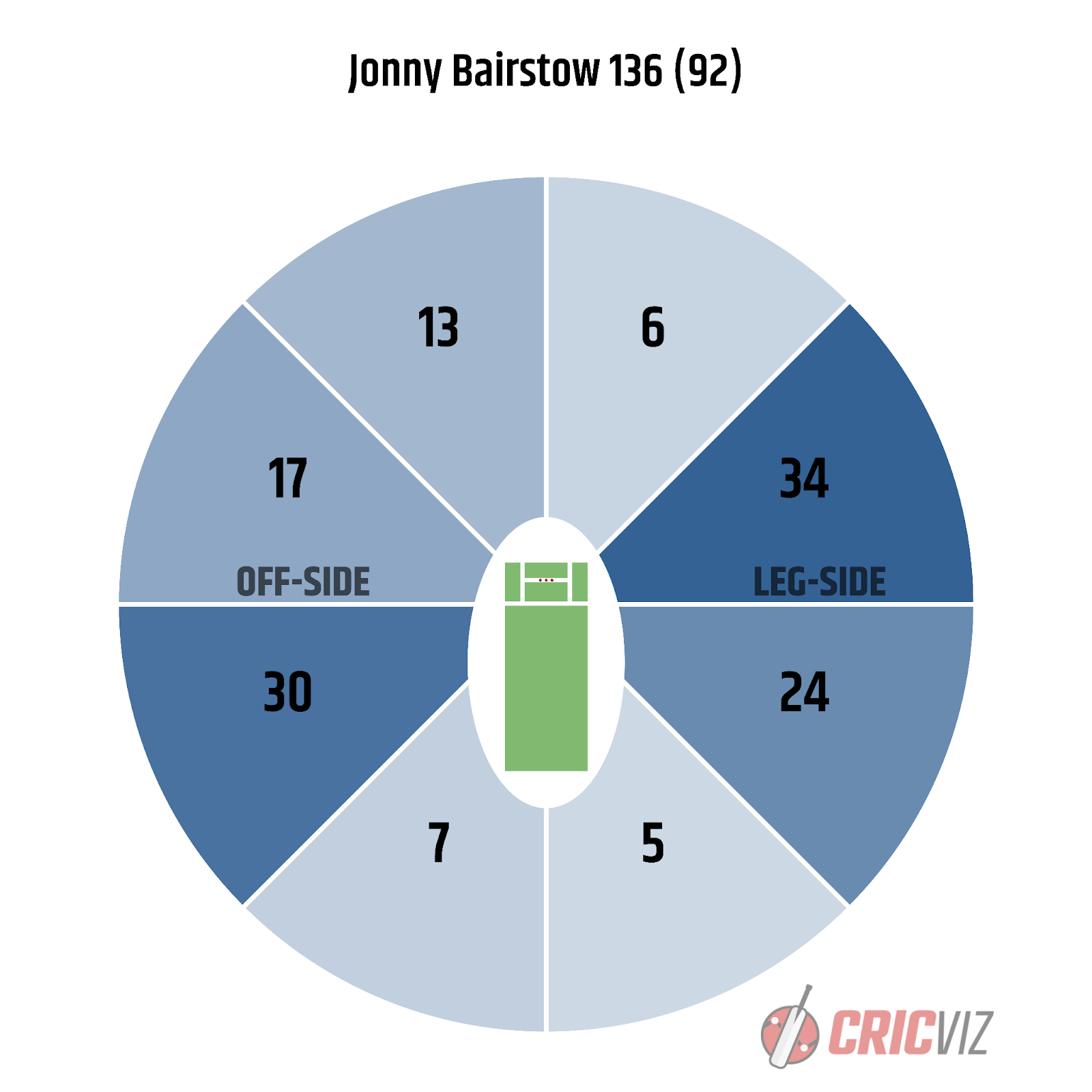 As he advanced towards the landmark, it was difficult to avoid the anticipation of what Bairstow had up his sleeve as a celebration. Because Bairstow tons are celebrated with anger. His runs are scored against people, spitefully brilliant fuck-yous. The helmet comes off to reveal a fury that feels targeted, vengeance fuelled.

But not this one – because nobody was against him. This one was met with a smile. A nonchalance, a gum-chewing contentedness. Yeah, I can bat like that – what of it. It was in innings that this new England era has encouraged, demanded, insisted upon.

This was an onslaught mimicking Ben Stokes. It was a blistering showcase of a white ball talent that is highly prized, of a man who spends the early season hitting sixes in the red of Punjab Kings, who has grooved his power in shorter forms. It was a level of aggression allowed and encouraged by the new coach Brendon McCullum. But ultimately, this was a display of the quality, courage, and magic of Jonny Bairstow.

In the more pedestrian context of Bairstow’s fight for his place, this surely sealed his spot for the summer at least. Since his recall in Australia, he has averaged 45, only a touch behind the all-conquering Joe Root. His three centuries in this time have seen him arrive at 36-4, 48-4 and 56-3. He has objectively been excellent, and while Harry Brook et al will have their time, we might not quite be there. There may yet be something left to squeeze from England’s World Cup winners in the red ball arena.

Ultimately, regardless of the naked numbers, England stick with Bairstow because they think he is more talented, with a higher upside than the alternatives. Increasingly, you’d have to be the most partisan Championship-addict to suggest they are wrong. 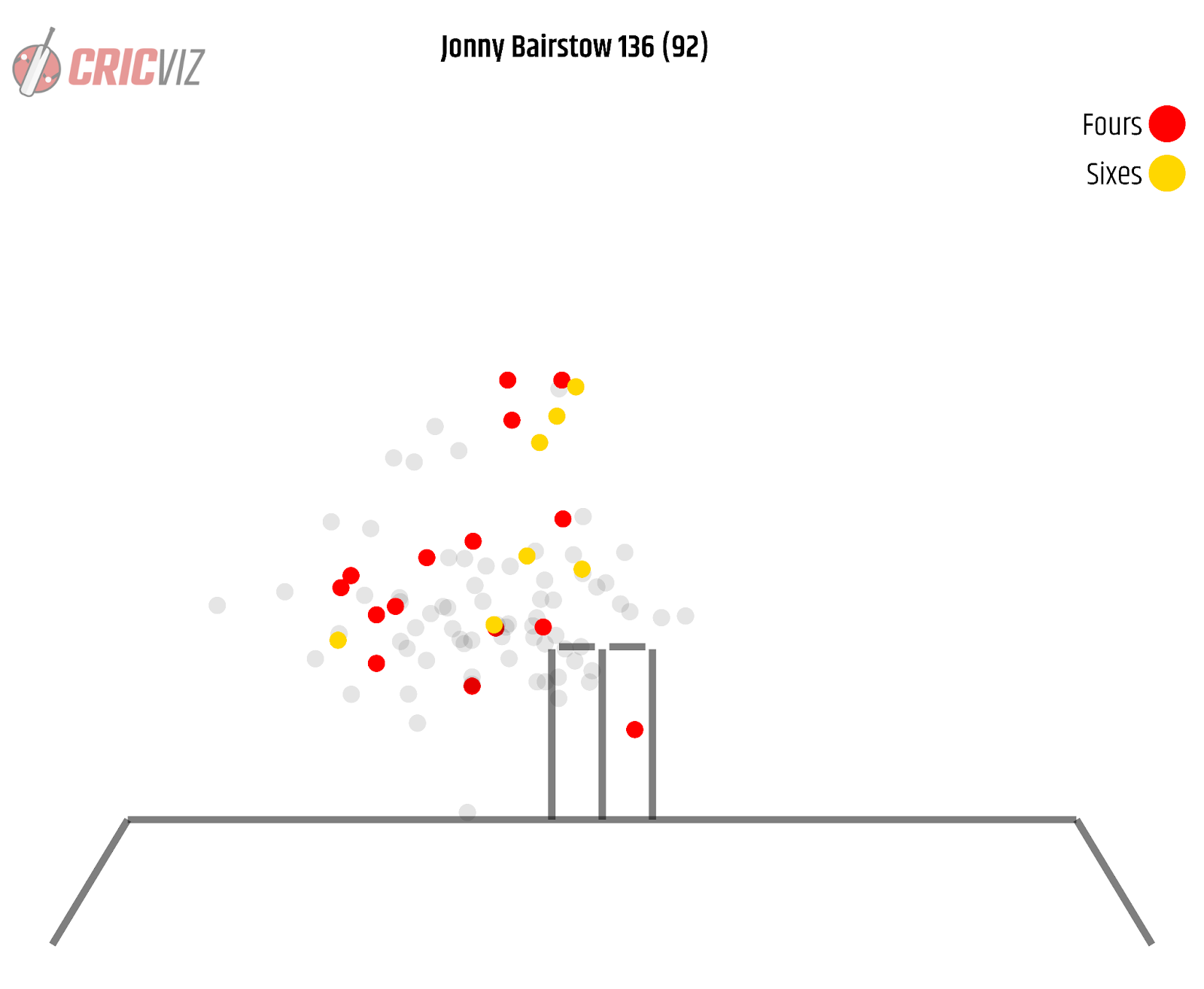 More widely, what this innings powered was pretty remarkable. No team in the history of Test cricket have scored as many runs in a fourth innings, at a quicker rate, as England have managed today. A flat pitch, a rare concoction of elite white ball players up against a tired and injury-weakened attack, but even so, this took a level of commitment to a style, to a way of winning, that England have looked very far from in recent times. It was apt that they completed their chase in 50 overs exactly, not only because this felt like a demonstration of the white ball talent that saw England claim the ODI World Cup back in 2019, but because of the similarities between this series and the revolution where that victory had its roots.

That 2015 series between England and New Zealand, where Eoin Morgan’s reinvigorated side slammed 400 in their opening match and barely looked back over the next four years, is rightly seen as Ground Zero for a white ball revolution which fundamentally changed what was possible in ODI cricket. England are not going to see that revolution in Test cricket, and to pretend they are is doing a disservice to the remarkable talent they had at their disposal in 2015. But the spirit feels very similar, in these early hours.

In this series so far, England’s attacking shot percentage is 35%, the highest they have ever recorded in a Test series since records began in 2006 – and I’ll throw a tenner down that it’s never been higher before. This is a statement of intent, an emphatic, chest-out declaration that this England team, Ben Stokes’ England team, are here to entertain.

It’s there in other players. Alex Lees’ game is transformed from his Caribbean debut, his fluent strokeplay this week a far cry from the timidity of his first series. The promotion of Ollie Pope hasn’t necessarily seen the Surrey batter play with any greater aggression on an individual level, but the promotion shows a willingness to back talent and temperament over tradition.

Since we have session data (2006), the three fastest scoring rates for lads scoring 90+ runs in a session are: Jonny Bairstow at Trent Bridge 2022, Brendon McCullum at Christchurch 2016 and Ben Stokes at Cape Town 2016. These things can be overblown, the style of a coach inferred from their own playing style. But it’s hard to not feel excited about the way this team has tried to play in these last two matches.

And frankly, so we should be. England – as well as India and Australia – have such an advantage over the rest of the world in terms of resources and wealth, that winning shouldn’t be enough. You have to win well, to win attractively, to win neutrals over when you come to town. In 1974, when Nottingham hero Brian Clough took over at Leeds United after they had won the league title, he declared that he in the wake of such a legacy, ‘I want to win the league but I want to win it better.’ McCullum and Stokes are hardly working in the shadow of a legacy as rich and successful as Don Revie’s, but the aims are not far off.

Perhaps that shows the failings of a format, of a cricketing economy where a side can’t simply excel but instead have to keep one eye open, one eye on the future, on the paying punters and the casual fans. It is hard to disagree. But that is where we are, and we can either block to irrelevance, or try. England, in a few encouraging weeks of sun-soaked optimism, are trying.

Sometimes, you just find yourself in a situation which demands a level of chaotic bravery. Headingley 2019 springs to mind. But what England have cultivated in these early days is a mindset which actively seeks out glory; as Stokes said to Mel Jones in the presentation interviews, they want “to run at the danger”. These phrases can tip over into management speak, into cliché, but Stokes himself has spent a career walking the walk, long before anyone asked him to talk the talk.

England are entering a new era where they may not win relentlessly with the consistency of Andrew Strauss’ side. They lack the quality to even come close to those players. But what they might be able to manage, and what they seem set on achieving, is a vibrancy, and a likeability in their play that goes beyond results, that takes wins as hugely welcome collateral, but not the fuel that drives every decision. With that at the centre of their style, this week in Nottingham has been as clear a declaration of intent as England’s Test team has managed in a long, long time.