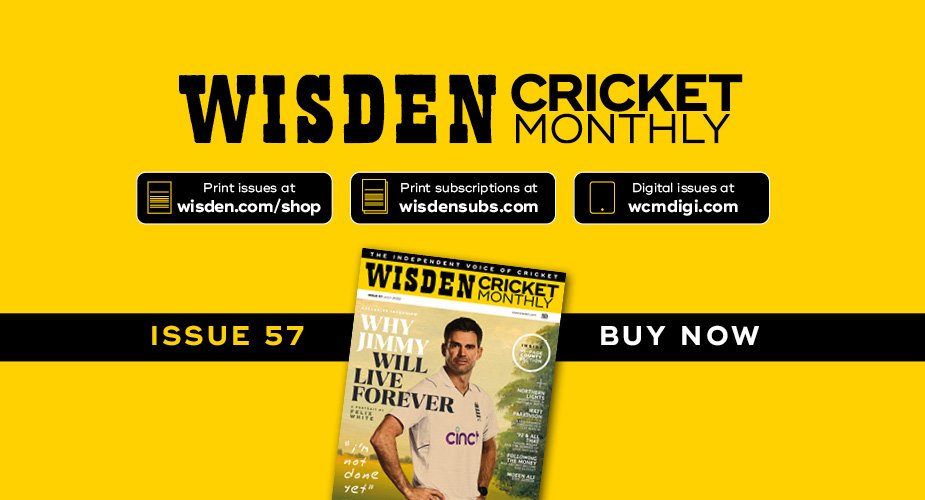 In the new issue of Wisden Cricket Monthly, out June 16, James Anderson gives a candid two-part interview to Felix White – conducted before and after the Lord’s Test – about a challenging few months, the unadulterated pleasure he still gets from bowling, and a fresh start under new leadership.

“My immediate response was to prove that I can still play at the highest level,” England’s greatest ever bowler tells his Tailenders co-host on the experience of being dropped from the Test squad earlier this year. “I just knew I wasn’t done yet.”

Elsewhere, we profile two northern lights embarking on their England careers, Matt Potts of Durham and Yorkshire’s Harry Brook, and examine how and where they learnt their craft, Matt Parkinson gives the inside story on his bizarre and long-awaited Test debut, and the masterful Jeremy Coney speaks to James Wallace about earning the right to have fun.

We have 15 pages of county news and interviews including conversations with Will Smeed, Jack Haynes and Will Jacks, while Daniel Brigham revisits the wizardry of Wasim and Waqar on Pakistan’s famously fractious 1992 tour of England.

Phil Walker delivers a special feature on the ingrained elitism in English cricket and how it’s being countered, Angus Fraser reflects on his wicket-laden career, and we consider the wider impact the FairBreak Invitational tournament could have on the women’s game.

Our crack team of columnists cover the most pressing issues, with Andrew Miller criticising the appointment of Sir Dave Brailsford to the ECB’s high-performance review, Lawrence Booth welcoming the fresh eyes of Brendon McCullum, Mark Ramprakash examining the importance of batting positions, and Geoff Lemon reflecting on the extraordinary life and career of Andrew Symonds. Before the brilliant Andy Zaltzman rounds things off with a deep dive into the number 14.

You can buy the magazine in stores across the UK (click here to find your nearest stockist) or purchase a subscription here.

Wisden Cricket Monthly is also available in digital form. You can purchase single issues or sign up for a subscription here.

10 standout quotes from the new issue:

“I wonder sometimes whether I’m oversensitive to it, but it feels like people are obsessed with age in sport. I was watching Liverpool during the Champions League final. Without fail they will mention that James Milner is 36. They’ll say, ‘Oh it’s a good shift from a 36-year-old’. It gets to me sometimes. Why does it matter if he’s 36?”
In an exclusive interview, the ageless James Anderson speaks to Felix White 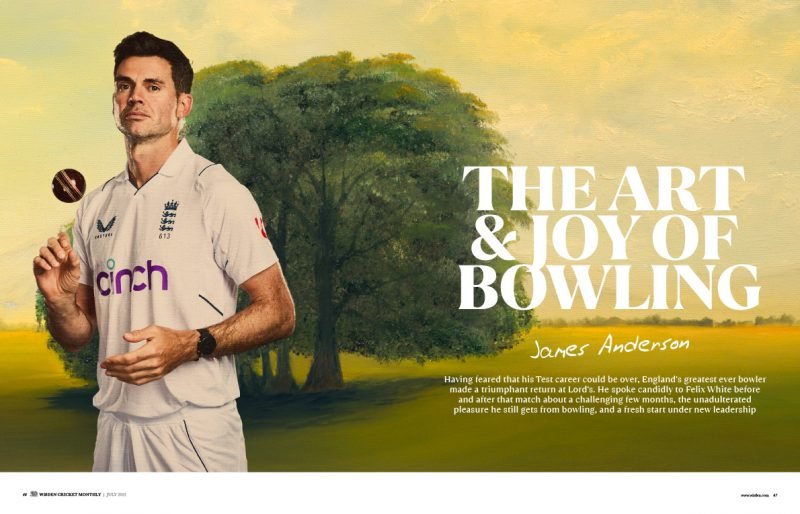 “Is this the company that English cricket really wants to keep? There are clearly still lessons to be learnt from a man who has worked with some of the most pressurised athletes of their generation, but there are optics to consider as well.”
Andrew Miller on the appointment of Sir Dave Brailsford to the ECB’s high-performance review

“I couldn’t understand the decision to bat me at three. Michael Atherton said it was an endorsement of my talent and that they were giving me a run in the side. My views weren’t aligned with the management’s and there’s no doubt that it played on my mind to some degree.”
Mark Ramprakash on the importance of batting positions

“He put £100 on Harry to play for England at 100/1 and collected his winnings last winter. Occasionally you can tell with players that they are just different to anyone else.”
Martin Speight, director of cricket at Sedbergh School and Harry Brook’s longtime coach, says there was always something special about the Yorkshire strokemaker 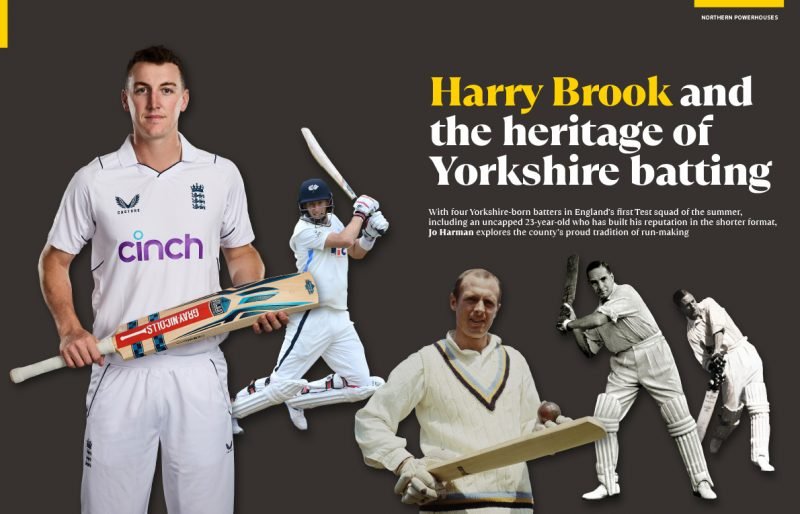 “McCullum has begun a four-year stint not with the aim of telling Alex Lees where his off stump is, or urging Stuart Broad to pitch it up a little more when conditions allow, but with a broader, almost philosophical, brief: to un-England England.”
Lawrence Booth says Brendon McCullum’s outsider status could be his greatest asset as England’s Test coach

“Our schools, with Ofsted on their backs, just care about exam results and league tables, and that’s sad.”
Garry Sapsford, head of PE at Shenfield High School, on the decline of cricket in state schools, as part of Phil Walker’s investigation into the game’s accessibility problem 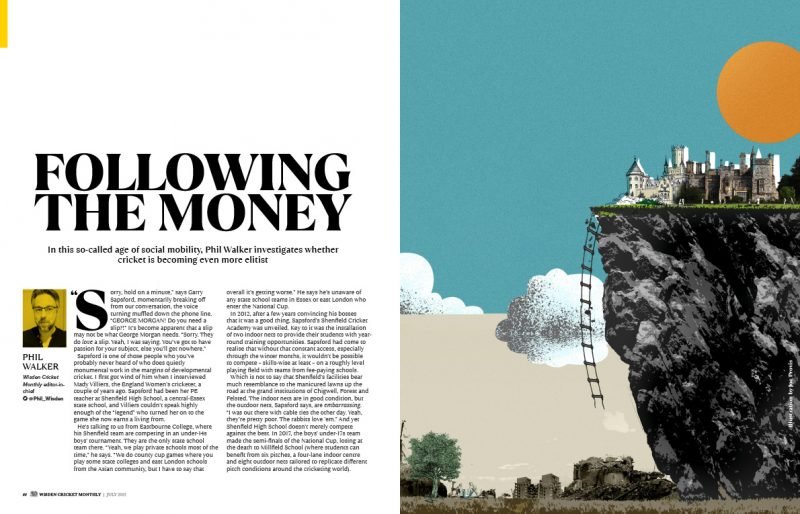 “His hitting was cited as proof of indiscipline, but could also be interpreted as selflessness, in the way that he saw fielding intensity as a way to support those around him. It guaranteed contributing to a team, less subject to the vagaries of fortune than batting or bowling. For him sport was about camaraderie, a place to find acceptance within a comfortable space of male bonding.”
Geoff Lemon reflects on the life and career of Andrew Symonds

“Those are the sorts of characters we had. John Bracewell – solid, so angry and determined. You need to be when you are digging graves in the cold dirt in Dunedin.”
The incomparable Jeremy Coney speaks to James Wallace about the New Zealand side of the Eighties 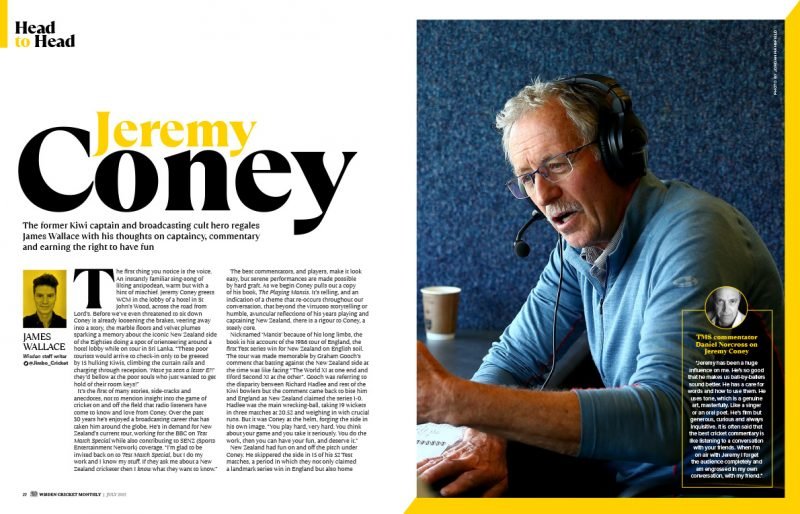 “I prefer to watch Test cricket. You still get goosepimples just watching it. I’d love to represent England in a Test match, that’s the pinnacle of the sport.”
Jack Haynes, Worcestershire’s exciting young batter who recently notched three Championship hundreds in as many matches, says red-ball cricket is his priority

“I did the whole over in my England sweater even though it was sweltering because I felt so proud to have it and didn’t want to take it off! My first wicket was Steve Waugh. I’ve still got that stump at home with a little red mark on it.”
Angus Fraser looks back on his wicket-laden career 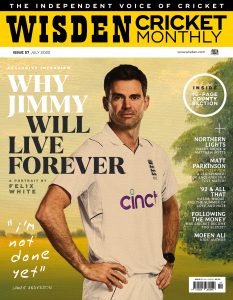