Cometh the hour, cometh Rishabh Pant: Rishabh Pant continued his brilliant run in the longest format of the game as he scored the 5th century of his Test career on Day 1 of the ongoing rescheduled final Test match against England at Edgbaston.

The stylish keeper-batter reached the three-figure mark with a double in the 58th over of the innings during the final session. Rishabh Pant had to take a dive to reach the milestone and what followed was an amazing celebration in the Indian dug-out.

Pant’s counterattacking innings made sure that the Indian side is in a brilliant position with Ravindra Jadeja on the other hand. The visitors were in trouble at one stage struggling at 98/5, however, Pant established the Indian innings after a flurry of wickets during the opening two sessions. He turned out to be a rescuer for the Indian side after the top-order collapsed. 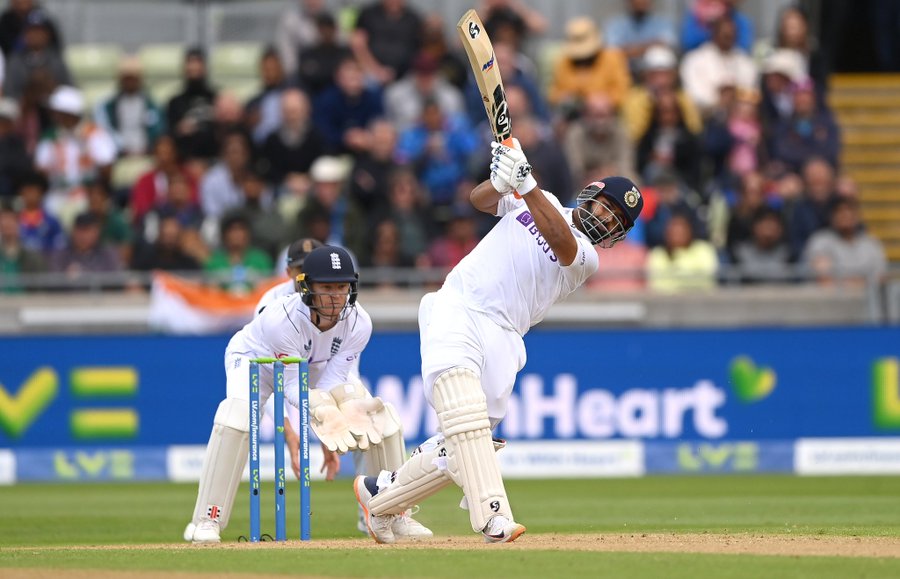 Rishabh Pant changed the tables for India with his stunning knock. He opened the account right away after Jack Leach was introduced into the attack and from there on, he smashed the bowlers to all the corners of the ground. The left-hander even came down hard to veteran James Anderson as he smashed him for a boundary on multiple occasions.

He was eventually dismissed after playing a stunning knock of 146 runs off 111 runs. His knock was laced with 19 fours and 4 sixes.

Meanwhile, he has been receiving praises from all corners for his terrific performance. From cricketers to experts and fans, everyone is coming up with their amazing reactions to Pant’s performance.

Among many, batting legend Sachin Tendulkar also took to his Twitter and hailed the brilliance of Rishabh Pant with a special Tweet. In his Tweet, he also praised the crucial innings by Ravindra Jadeja and also praised both the cricketers for the way they rotated their strike well. He wrote: