India’s star all-rounder Ravindra Jadeja continued where he left on Day 1 of the ongoing rescheduled Test against England at Edgbaston and registered his third Test ton. After Rishabh Pant, Ravindra Jadeja dominated the show in the first innings at the Edgbaston Test.

On Day 1, when Jadeja had walked out to bat, the Indian side was in some deep troubles at 98-5. Jadeja started off the innings at a slow pace and played the role of an anchor, allowing Pant to lead from the front. Together, they formed a formidable partnership and added 200-plus runs. While Pant played a fiery knock, Jadeja took his time to settle in. Before Jadeja reached the half-century, Pant also completed his century in just 89 balls. 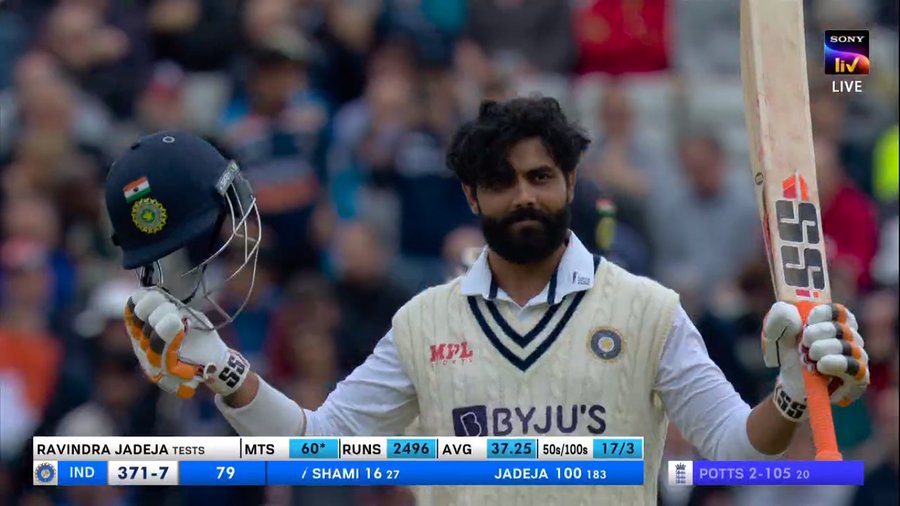 Ravindra Jadeja continued from where he had left on an opening day as he switched gears to attacking mode by smashing the England bowlers to all the corners of the ground. Mohammad Shami assisted Jadeja well from the other end and tried to rotate the strike as much as possible.

Jadeja also survived the scare in the nervous nineties as he was dropped by Zak Crawley on 92. He reached the three-figure mark off 183 deliveries and after registering only the third century in his Test career.

Meanwhile, his ton was widely appreciated by the cricket fraternity with praises coming in from all corners. From cricketers to experts and fans, everyone took to their social media to hail the brilliance of the star Indian all-rounder.

Among many, Chloe Amanda Bailey, who is a cricket journalist and a huge fan of Virat Kohli and Indian cricket, also took to her Twitter and hailed the performance of Sir Jadeja. In her Tweet, Chloe-Amanda heaped praises on the ‘rockstar’ Jadeja for his marvelous performance. She wrote:

Also Read: Suresh Raina Hails Jasprit Bumrah For Smashing 35 Runs In An Over

'This is BazBall, India Style' – Jasprit Bumrah Smashes Stuart Broad For The Most Expensive Over In Test history