Virat Kohli may not hold any captaincy or vice-captaincy position in the Indian team anymore, but he doesn’t need it to lead the side, to motivate them, to inspire them, to be the ever-so pumped-up Kohli.

In absence of both the covid-19 ridden captain Rohit Sharma, and his deputy, KL Rahul, who recently underwent surgery for a hernia, the BCCI had selected fast bowler Jasprit Bumrah to lead India in the Edgbaston Test.

However, Bumrah had never captained at any level of cricket, be it domestic or IPL. So that was a slight concern for Indian fans going into the all-important Edgbaston Test which is the fifth Test of the Pataudi series from last year which India lead 2-1 and aim to register their first Test series win on England soil since 2007. 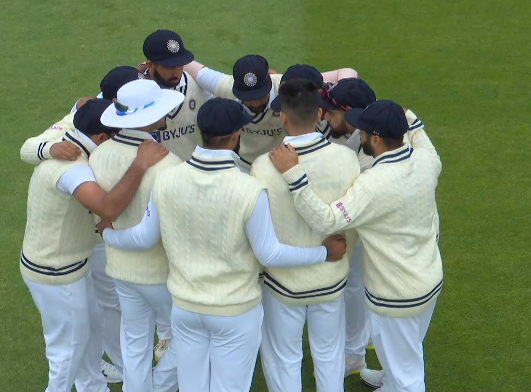 Stepped up Virat Kohli as a helping hand to Bumrah. Before the start of England’s innings on Day 2, Kohli was seen giving a stimulating pep talk to the Indian players in the team huddle, as he always did as India’s captain. While Kohli was not audible, the TV cameras spotted him speaking energetically to his teammates and the video of the same went viral all across social media.

You can watch the video here:

Kohli giving the team talk as Bumrah watches on. pic.twitter.com/vHk2UhePH0

Virat Kohli led the team huddle, giving his fielders the pep talk ahead of the second innings.

Kohli was also later seen assisting skipper Jasprit Bumrah with the field setting when the speedster was bowling fire from his end and tormenting the English batters. As Bumrah and Kohli discussed over the field placement the cameras caught the former skipper giving his suggestions to the current stand-in skipper.

This is nice to see Virat Kohli helping and Advising Jasprit Bumrah on his debut as captain. pic.twitter.com/rhMd6EMWMq

Fans were stoked on seeing Kohli take charge despite not being the official leader, but the former captain remains inspirational to his teammates and continues to do his best for the side.

Here are some of the reactions to Kohli’s take-charge today:

Kohli talking in the huddle. Feels like he’s still the captain. Once a leader always a leader ️

Once a leader… always a leader. Captain Kohli :’)🫰 https://t.co/MrkezUbWGj

A Leader need not always be a Captain!

Virat Kohli addressing the team huddle 🥰 He may not be the captain but can never take out the leader Outta him. #inflation

Meanwhile, Jasprit Bumrah knocked over England’s top three all alone – all of Alex Lees, Zak Crawley and Ollie Pope were dismissed by the Indian skipper, who earlier during his batting innings, created the world record for most runs in a single over in Test cricket: Stuart Broad conceded 35 runs in an over to Bumrah while 29 came off Bumrah’s bat.