Jonny Bairstow has continued his belligerent form as he whacked his third Test century in three consecutive Tests, smashing the Indian bowlers around the Edgbaston ground keeping England afloat in this all-important fifth Test of the series.

After hammering hundreds against New Zealand at Trent Bridge and Headingley, the Yorkshireman slammed one, against a stronger and deeper bowling attack of India.

However, Bairstow had started off his innings cautiously and opposite to his gung-ho approach. He scored 12 runs off 47 deliveries in the final session of Day 2 and was again sedate on the morning of Day 3.

In fact, it took a heated argument with Virat Kohli to put on the Jonny Bairstow that we saw vs New Zealand. After the spat with Virat Kohli, the right-hander turned on his beast mode and plundered the Indian bowlers.

Bairstow saw off Jasprit Bumrah’s threatening morning spell and tore into the other bowlers, dealing in a spate of boundaries as non-striker Ben Stokes too counter-attacked, however, the English skipper couldn’t go beyond 25, when the team total was 149/6. 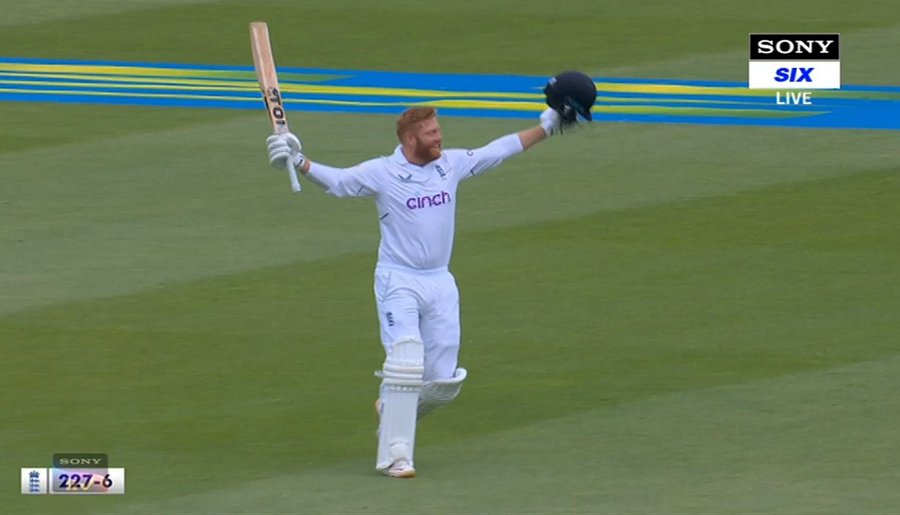 Bairstow brought up his fifty, off 81 balls, and grew even more dangerous against the likes of Mohammed Siraj and Shardul Thakur, clattering the two seamers into the leg-side boundary, taking him on as if the leg-side fielders didn’t exist and found perfect gaps between them. He walloped Siraj and Thakur for a six each over the deep fielders.

Soon he raised his century, and perhaps even Virat Kohli would have been regretting enraging Bairstow. Bairstow was 13 runs off 61 balls before his argument with Kohli; he teed off splendidly after that, smashing 87 runs off the next 58 balls, and brought up another quickfire century off 119 deliveries, celebrating it animatedly.

Bumrah returned for another spell and kept Bairstow quiet: from 100 off 119 balls, Bairstow went to 106 off 140 balls, before edging Shami to Kohli at first slip. Kohli gave Bairstow a flying kiss send-off, however, the batsman had by then hurt India very much.

Twitter was in awe of Jonny Bairstow’s thunderous form as saluted the right-hander.

Here are some of the best tweets:

The run machine of England in Tests in 2022 – Jonny Bairstow.pic.twitter.com/g1EieRcTDZ

Three hundreds In successive Tests for Jonny Bairstow. He’s unstoppable and to India’s chagrin,hasn’t even broken into a sweat! Incredible knock

Jonny Bairstow is the leading run scorer in Test cricket in 2022. pic.twitter.com/WTE0oW6GIU

The of world cricket right now.

Has anyone ever played better over 3 consecutive Test matches .. Sure many have come close but I would argue @jbairstow21 is top of the list .. #ENGvIND

That’s his third century in his last three Test matches, and the 11th of his Test career