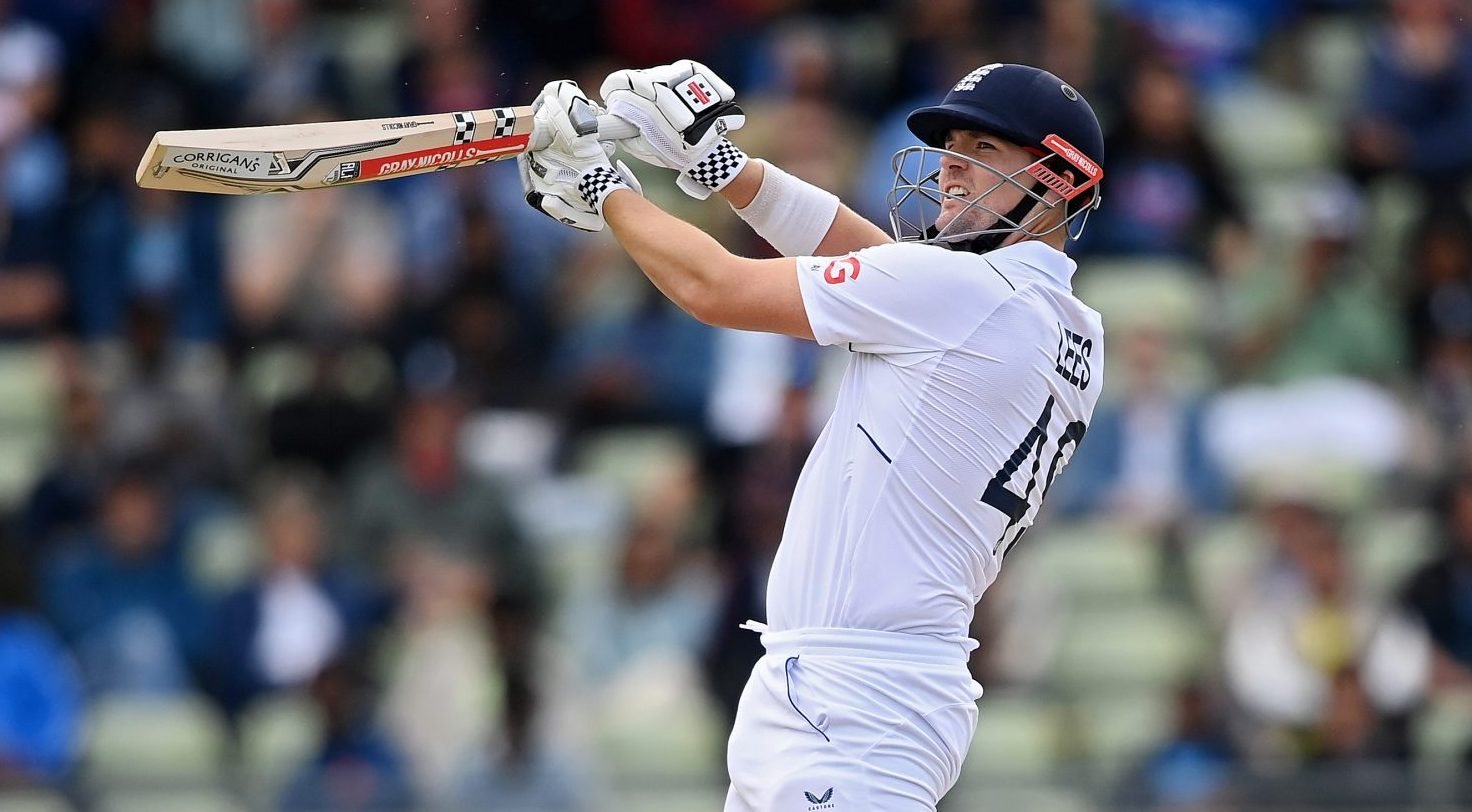 In Alex Lees’ first series as a Test cricketer, he barely timed a ball. Clunky pushes struggled to reach the ropes. Half-edges either side of the wicket were the most productive strokes. We readied ourselves for the ‘Dom Sibley Conversation’, stroked our stubble and pontificated if 30 off 138 was a useful contribution if England went on to make 550. Lees looked capable of sticking it out, facing more than 75 balls per dismissal, but little more, with a top score of 31 and an average of 21.

He arrived in the England set-up with one of those makeshift, anti-meta methods only the County Championship can produce, a frankenstein’s monster of a thing designed to negate a very specific set of challenges: Duke’s balls, green pitches, April skies, medium-pace seam. Batting is tough in the shires, uniquely so, and the solutions openers come up with are rarely natural. Lees explained how he had “batted a foot outside off stump and a foot outside the crease to get outside the line of off stump”. Everything had been geared towards survival, and in the Caribbean, it showed.

By all the learned logic of a nascent Test career, Lees should have been thinking about survival today as well. Early into the McCullum tenure, there were tentative signs of a player improved, a technique, with which he is constantly tinkering, simplified and much credit was paid to his 60-odd and 40-odd at Trent Bridge even as Jonny Bairstow took the plaudits. But by the start of England’s Edgbaston chase, six and a half Tests had come and gone, and in only one of them had he managed a score above 35.

Lees stood out most clearly as a vestige of the old order, picked for the Caribbean because there was no one else, and picked for New Zealand because he had just about done enough. Had he been dismissed in the second innings at Edgbaston without scoring, his average would have dipped to 21.50, with England having a month to ruminate on that fact before picking the squad for South Africa. And with all that in his head, he came down the track third ball and smeared Mohammed Shami for four. The unhittable Mohammed Shami, the one who passes the edge roughly once in every three deliveries when bowling in England, clumped through the leg-side.

That was just the start. As Ravindra Jadeja warmed up, so too did Lees, shadow-practicing his reverse- and slog-sweeps, and then unveiling both within two overs after the left-armer was introduced. He arched his back and carved over the slips. He swaggered down the pitch after each shot, chewing his gum rhythmically, his bat cocked over his shoulder as he prepared for the next delivery, providing his best McCullum impression in more ways than one.

The best stroke of all was saved for the milestone, Mohammed Siraj blocked off the back foot, with no follow-through but such good timing that the ball teased the fielder all the way to the rope, like a left-handed Damien Martyn. The only restraint Lees showed all innings was holding himself back after being called through for a non-existent single by Joe Root. He can content himself with having laid the platform for what could still be a riproaring chase.

Much has been made of McCullum’s impact on England’s approach, but brave words and big talk mean little if you can’t convince your troops to buy into the message, and the task will be harder with some than with others. Ask Jonny Bairstow to bat like it’s the first 10 overs of an ODI, and his eyes will light up. Ask Lees the same thing and he’ll point out he’s never played one.

That Lees had the shots was signposted early on: he made an unbeaten 275 in the County Championship as a teenager, and earned the nickname ‘Haydos’ from former Yorkshire coach Jason Gillespie for a supposed resemblance to Australia’s legendary front-foot-forward opener. But the strokes will have been buried deeper and deeper by every pad blown off and every edge sought out.

It has been tempting to ascribe this brave new way to English over-excitement, to conclude, sadly but sensibly, that it extends to little more than a freak run of form from a sleeping giant, carving out a few thrilling innings on flat pitches against a cowed attack wielding a duff ball. That McCullum has managed to get a player chipped and reshaped in the peculiar county cricket mould to really believe that, having stepped up to the highest tier possible, the solution is not to withdraw inward, to give into the temptation and succeed while doing so is the most significant sign yet that it’s something more.

Getting Lees, and whoever follows him, to dream, when all they’ve had for so long is fear, could be where the McCullum era’s true value is found.

Quiz! Men's Test Players With The Highest Average In The Middle Order