MOST WICKETS FOR INDIA IN TEST CRICKET HISTORY 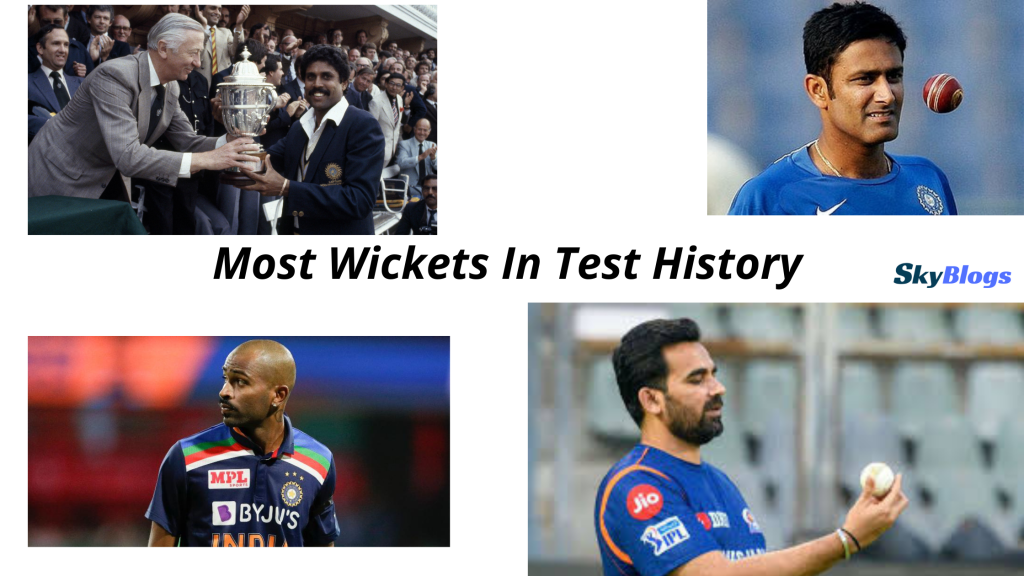 Test cricket is the most underrated format nowadays after the inception of T20 cricket in 2005. But it shows the real character, patience, and skill of a player, especially of bowlers. A bowler needs to be rigid and bowl consistently on good length with a bit of swing in order to get wickets as the batsmen don’t just give their wicket away. India has done really well in test cricket so far, especially after MS Dhoni’s arrival as a captain in 2008. Over the years many bowlers have come and gone in the longest format of the game. So let’s contemplate the bowlers with the most number of wickets in Tests for India.

Former Indian leg-spinner Anil Kumble has taken the most number of wickets (619) in tests for India. Kumble made his test debut in 1990 against England and went on to play test cricket for another 19 years before retiring in 2008. Kumble was a bit faster than other spinners and would bowl wicket to wicket in order to trap the batsman with his slight spin. Anil is also the third-highest wicket-taker in the history of test cricket. He even bagged ten wickets against Pakistan in an innings in 1999 in Delhi. He has also registered the most number of 10-for (8) & 5-for (35) for India in tests.

Current Indian off-spinner Ravichandran Ashwin comes at 2nd place in terms of taking most wickets (442) in tests for India. Ashwin made his test debut in 2011 and so far he has done really well. Ashwin is known for his bowling on the same spot with varieties. He averagely takes 5 wickets in every test match. Ashwin also has the best bowling average (24.13) among the bowlers who played more than 60 matches for India. He has been pretty well with the bat also with 2905 runs including 5 centuries. It is said that Ashwin can break Kumble’s 619 wickets record if he goes on to play for another 50 matches. Ashwin now has the 2nd most 5-for among Indian bowlers in the longest format of the game.

The former Indian captain Kapil Dev has grabbed the 3rd most number of wickets (434) for India in tests. He made his first appearance in test format in 1978 against Pakistan and bid adieu in 1994. Kapil is the only all-rounder on the list. He is also the first Indian first bowler to take 400 test wickets. Kapil has the best average (29.64) among fast bowlers of India, who have played more than 70 tests. Along with wickets, he has amassed 5248 rupees also with the bat. Kapil Dev is considered as one of the best all-rounders of all time. His out swing bowling used to make batsmen dance on the crease.

Ex-Indian off-spinner Harbhajan Singh has bagged the 4th most number of wickets (417) for India in tests. Singh played 18 years (1998-2015) of test cricket for India. Harbhajan is the first off-spinner to get 400 test wickets for India. He used to take wickets regardless of conditions. He has bowled with a commendable bowling average of 32.46. In his test career, he has got 25 5-for, and five 10-for.

Veteran Indian left-arm seamer Zaheer Khan has taken the 5th most number of wickets (311) in test format for India. Zaheer made his test debut in 2000 against Bangladesh and played his last match in 2014 against New Zealand. Khan was known for his accurate bowling, he could swing the ball both ways and trouble the batsmen. He is the only left-arm fast bowler from India to play more than 50 test matches and bagged more than 300 wickets. He was the leader of the Indian fast bowling attack in his time.

Existent fast bowler Ishant Sharma gets 6th place on the list of the most number of Test wickets (303) for India. Ishant played his first test in 2007, and so far he has done really well in the longest format of the game, taking wickets with a praise-worthy average of 32.30. He is currently the most experienced bowler of the Indian side, completed 100 test matches as only the third fast bowler of India. He has taken eleven 5-wicket hauls so far in the toughest format of the game.

Bhagwat Chandrasekhar has grabbed the 8th most test wickets (242) for India. In his 16 years (1964-1979) test career, he had troubled the batsmen a lot with his outstanding leg-break bowling. Before Kumble, he was the best leg-spinner of India. He had a commendable bowling average of 29.74. Chandrasekhar was given the “Wisden Bowling performance of The Century” award in 2002 for his outstanding 6/38 against England at Oval in 1971.

Present Indian all-rounder Ravindra Jadeja is at 9th place on the basis of grabbing the most number of Test wickets (242) for India. Jadeja is the second all-rounder on the list of most number of wickets in tests by Indians. He made his first appearance in the longest format of the game in 2012 against England. Till now he has taken wickets with an excellent average of 24.45, which is the highest among Indian bowlers in test format. Along with the ball, he has scored 2370 runs with the bat and has equally fascinated everyone with his magnificent fielding.

Former Indian fast bowler Javagal Srinath has bagged the 10th most number of Test wickets (236) for India. Srinath made his test debut in 1991 against Australia and played for more than 12 years before tying his boots in 2002. He was the leader of the Indian pace attack in the early 90s. Srinath was known for his exceptional inswing bowling. He carried on with an awesome average of 30.49.

Who has taken the most Test wickets for India?

Anil Kumble has taken the most Test wickets for India (619).

Which current player has the most Test wickets for India?

Ravichandran Ashwin has the most Test wickets for India (442).

Who Are The England Lions Set To Take On South Africa?