Harsha Bhogle Wrote A Special Tweet For Sneh Rana After Her Fiery Final Over: The Indian women’s cricket team entered the final of the Commonwealth Games 2022, Birmingham, after defeating hosts England in the semi-final on Saturday at Edgbaston. They will face off the winner of the other semi-final, between Australia and New Zealand, in the final on Sunday.

It was a really close game, going down to the wire with teams having an upper hand at different stages in a topsy-turvy match.

Eventually, it boiled down to off-spinner Sneh Rana being tasked to defend 14 runs in the last over against Katherine Brunt and Maia Bouchier. Her challenge was made even difficult after India had been penalised for slow over rate and hence, according to the new T20 rules, India had to bring in one fielder from deep to inside the circle and now they could have only three fielders in the deep. 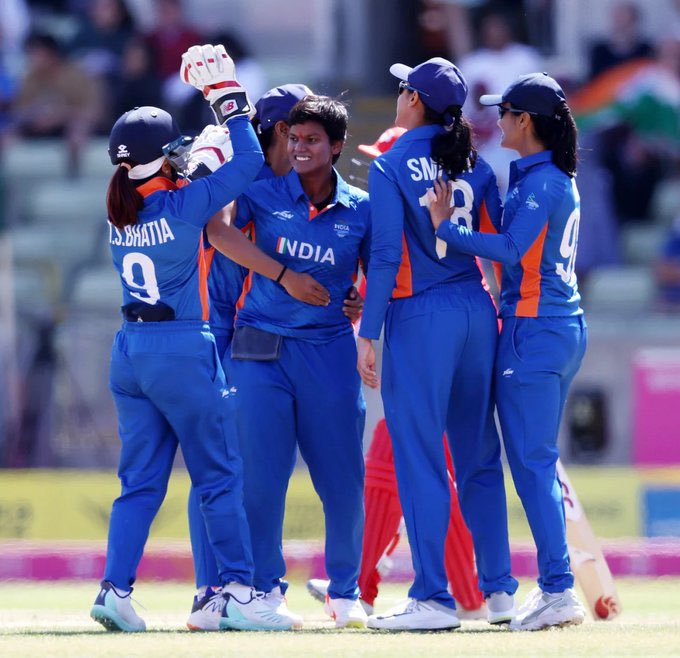 However, Sneh Rana, who had already delivered a brilliant 18th over where she conceded only 3 runs, once again kept her nerve and delivered a nerveless first five balls giving away only three runs to effectively seal the game, before Sophie Ecclestone hit a six on the last ball to no avail.

Rana was absolutely nerveless; clear in her plan from the moment she took the ball to bowl the last over: fast and full, targeting the base of the stumps, which wouldn’t give the batter the time or length to get under the ball to hit a boundary, which England so desperately needed. On the third ball of the over, she had Brunt, almost scooping hardly but only to mid-off where skipper Harmanpreet took a safe catch.

And even though on the fourth ball, Ecclestone was dropped by substitute fielder Harleen Deol, Rana kept her cool to see India home.

Earlier, India had put a par total of 164 runs powered by opener Smriti Mandhana fireworks in the powerplay. The left-hander cracked 61 runs off 32 balls with the help of 8 fours and 3 sixes to give India a strong start. But they lost wickets in the middle as the momentum fizzled out.

Number 3 batter Jemimah Rodrigues, though, who has been in good form in this tournament after returning to the side, carried on to bat till the end, holding one end of the innings, and remained not out on 44 off 31 balls to take India to 164.

Renowned commentator Harsha Bhogle came up with a special tweet to hail the trio of Mandhana, Rodrigues and Rana for their terrific efforts that took India to the final.

“How good were those two friends @mandhana_smriti, who is just a rockstar, and @JemiRodrigues! And there is something about @SnehRana15. Always seems in control,” Bhogle tweeted.